From a Traffic Ticket to Jail?

Currently 33,000 Minnesotans have their driver’s license suspended every year because of unpaid traffic fines and fees. Minnesota law allows a driver’s license to be suspended if someone fails to pay a fine for a traffic violation or fails to appear in court in response to a ticket. These excessive fines and fees are hurting everyday Minnesotans, who just want to get to work, buy groceries and take care of their families.

The ACLU of Minnesota is fighting for legislation that prohibits the state from taking away driver’s licenses for failure to pay a ticket and ensures that our courts work as arbiters of justice, not as debt collectors.

“In Minnesota, we have some of the worst racial disparities in the nation,” said Leslie Redmond, president of the Minneapolis NAACP. “Depending on who is sitting in the driver’s seat can determine if you are getting stopped or not, and that is a problem that we need to acknowledge. A lot of the time, it’s people who look like me, especially the male version.”

The Minneapolis NAACP and Minnesota Asset Building Coalition joined the ACLU of Minnesota’s Feb. 13 town hall “From a Traffic Ticket to Jail?” in North Minneapolis. It addressed our wealth-based justice system, in which people with otherwise identical records receive different punishments solely because of their ability to pay. Local and state elected officials listened to community members who have spent thousands of dollars trying to get out from under unnecessary fines and fees.

A number of years ago, Ismael Dore, now an ACLU-MN organizer got many tickets while living in his car because he was homeless. Unable to pay the tickets, he lost his car and his temporary housing. Now, he has a driver’s license, but his fight against the system of unnecessary fines and fees is not over. He still has to pay reinstatement fees and extra insurance to keep his license on top of paying back all the tickets he got.

Even if someone pays their traffic tickets, their record can affect their ability to get a job. Minneapolis resident DeVale Watson wanted to be a firefighter. He applied, had an interview and his chances looked good until he got a call from his would-be employer about his traffic tickets. Even though he paid his tickets, he believes they may have cost him his dream job. He now attends community events to share his story and advocate for reform.

Fortunately, the Minnesota Legislature is considering legislation that would address this widespread injustice. HF 1060/SF 1375 is a bill that requires courts to consider financial hardship and authorizes courts to reduce or waive fines and fees, and HF 1061/SF 1376 is a bill that would end the practice of suspending people's licenses because of their inability to pay and retroactively reinstate licenses for tens of thousands of Minnesotans. We have a responsibility to ensure that our justice system is fair for every Minnesotan regardless of their ability to pay.

Take a stand for the 33,000 Minnesotans who lose their license every year due to unpaid fines and fees. 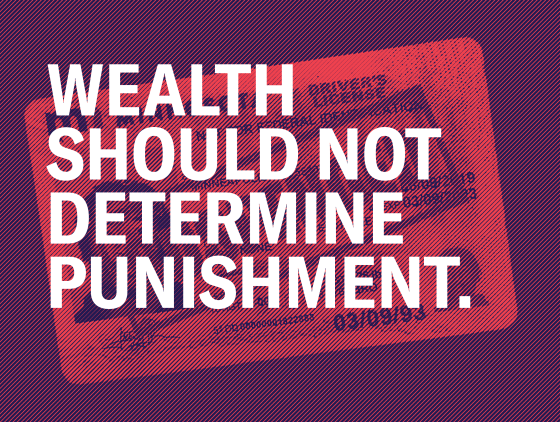