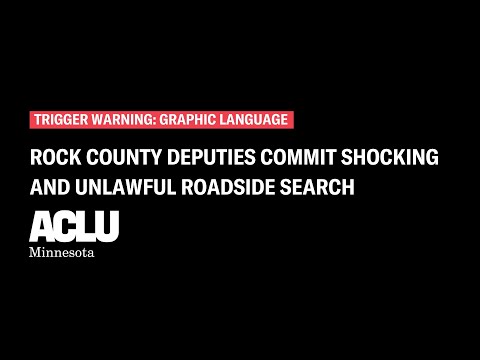 The American Civil Liberties Union of Minnesota on Wednesday sued the Rock County Sheriff and two deputies who tried to forcibly conduct a vaginal search on the side of a public road in below-freezing temperatures.

Kelli begged them repeatedly to take her into the station or hospital to search her “the right way.” Deputies ignored her repeated pleas for basic dignity. Instead, Deputy Hamm offered to shine a flashlight on Kelli’s vagina to aid the search. He told her because she refused to consent to the search, she couldn’t get into the police car to warm up, at one point telling her that she had lost her privilege to be warm. The Rock County Attorney’s office later dismissed any charges against her.

“It’s disturbing to me that I was on the side of an interstate like that,” Kelli Torres said, adding she hopes the deputies get fired to prevent this from happening to other women. “I feel very violated by the whole situation. I repeatedly asked them to do the right thing. It makes me not trust law enforcement.”

“The action by Rock County’s deputies clearly shows that Kelli Torres’ dignity did not matter, and they believed they could treat her however they wanted in violation of the Fourth Amendment,” said ACLU-MN staff attorney Ian Bratlie. “They used a dangling air freshener as an excuse for stopping the vehicle and had no excuse to search the passenger, let alone conduct a body cavity search on the side of a public road in below-freezing temperatures. This conduct is shameful, and must be greeted with training, discipline and policy changes to avoid this situation in the future.”

The ACLU-MN is asking the court to find the defendants’ conduct – including the lack of training and supervision – violated the law; to award Kelli Torres damages; and to prevent future unlawful conduct and retaliation against her.