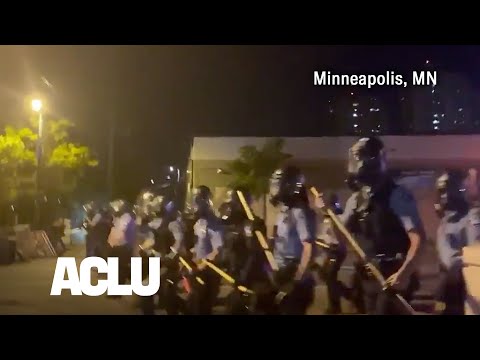 The ACLU of Minnesota filed a class-action lawsuit overnight Tuesday on behalf of journalists targeted and attacked by law enforcement while covering protests over the police murder of George Floyd.

Over the past week, Minneapolis Police and the Minnesota State Patrol have engaged in an extraordinary escalation of unlawful force deliberately targeting journalists. They have tear-gassed, pepper-sprayed and shot journalists in the face with rubber bullets, partially blinding a photographer. They have arrested journalists without cause and threatened them at gunpoint – even though these journalists identified themselves and were clearly in the middle of reporting.

The lawsuit seeks a temporary restraining order and a permanent injunction to stop law enforcement from attacking and targeting journalists, now and in the future; a declaration that police conduct violated the First, Fourth and Fourteenth Amendments; and damages.

“Law enforcement is using violence and threats to deter the media from vigorously reporting on demonstrations and the conduct of police in public places,” said ACLU-MN Legal Director Teresa Nelson. “We depend on a free press to hold the police and government accountable for its actions, especially at a time like this when police have brutally murdered one of our community members, and we must ensure that justice is done. Our community, especially people of color, already have a hard time trusting police and government. Targeting journalists erodes that public trust even further.”

The lawsuit’s lead plaintiff, Jared Goyette, was documenting protesters’ efforts to shield and help a seriously injured young Black man when police fired a projectile at his face. He joined the lawsuit to stop these police actions, and to get information about what internal decisions led to them.

“Journalists aren’t the only victims,” Goyette said. “Actions like this make protesters, people trying to advocate for change, more vulnerable because journalists provide a witness and police are aware of that. Without journalists there, police or other people in power can feel a sense of impunity that no one will see what’s happening anyway. Everyone needs to know people are watching.”

Law enforcement fired these ballistic rounds, markers and tear gas without warnings or orders for dispersal, an unprecedented move that violates established practice, as well as standards of humane and ethical conduct. Los Angeles Times journalist Molly Hennessy-Fiske, who has covered the military in Iraq and Afghanistan and protests across the U.S., said she had never been fired upon until reporting in Minnesota.

“Without a free press, we can’t have a free society,” said attorney Kevin Riach with Fredrikson & Byron. “The press protects us all by keeping us informed about the activities of our government. When the government violently represses journalists in violation of the Constitution, we have a duty to speak out and protect the press in return.”

The lawsuit points out that Minneapolis police have a history of unconstitutional actions against journalists, and are displaying a failure to train, supervise, investigate and discipline officers over journalists’ due process violations.

The ACLU-MN is pursuing legal options to stop police brutality against protesters and POC organizers.