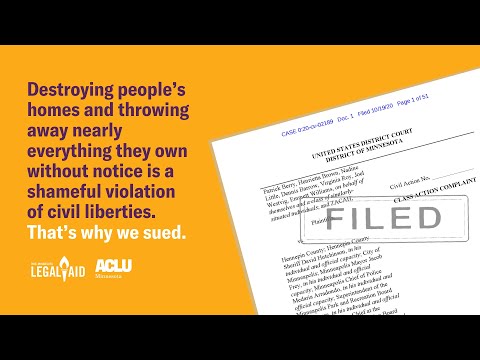 MINNEAPOLIS -- Seven homeless individuals who were evicted from their homes in city parks and saw their property destroyed filed a class action lawsuit in federal district court Monday.

The complaint against Hennepin County, the City of Minneapolis, the heads of local law enforcement and the Minneapolis Parks and Recreation Board alleges that the city and county violated the constitutional rights of the plaintiffs and others living in the parks by destroying encampments. Giving little or no notice, law enforcement bulldozed people’s shelters, throwing away personal belongings including keepsakes, identification cards, clothing and blankets.

“Clearing the encampments damages thousands of dollars in property - those tents are $100 apiece -and people's important documents, family photos and medication get destroyed,” said plaintiff Patrick Berry, who lost his tent, mattress and sleeping bag. He saw friends arrested and pepper sprayed. “People are already suffering so much. It is really cruel what the city is doing.”

The lawsuit filed by Mid-Minnesota Legal Aid and the American Civil Liberties Union of Minnesota asks the federal court to halt these unlawful sweeps unless and until safe and adequate shelter is found. The individual plaintiffs are joined in the lawsuit by ZACAH, a nonprofit that supports Minnesotans facing poverty and displacement from their homes.

“Homelessness is a crisis across the country, even in our prosperous city of Minneapolis, and simply removing people from public view is not the solution,” said Justin Perl, Litigation Director of Mid-Minnesota Legal Aid, one of the plaintiffs’ attorneys. “The city and county's bulldozer approach is not only cruel, it is shortsighted, counterproductive, and a waste of taxpayers' dollars. We need a real plan to help these Minnesotans who have nowhere else to go.”

“There are thousands of people who are homeless in the Twin Cities, and the city and county have failed to offer adequate shelter or housing,” said ACLU-MN staff attorney Clare Diegel. “Instead, the so-called plan is to repeatedly kick out hundreds of residents without permanent homes from public parks, upend their lives, destroy their property and then fail to find them somewhere safe to live. Throwing away people’s only belongings without notice is a shameful violation of their civil liberties.”

The complaint states: “These sweeps, conducted by Defendants, eject Plaintiffs from the public parks where they have been living, sometimes forcing them to move into crowded shelter spaces in spite of the severe public health danger posed by the COVID-19 pandemic.”

ZACAH President Dr. Bilal Murad, representing the ZACAH board, said that while community members are doing their job in taking care of their neighbors, the city and county have neglected their responsibilities: “The city and county have an obligation to increase access to deeply affordable housing and to provide adequate emergency housing, especially with an influx in CARES funding. Rather than working with the community, these constant, disruptive encampment sweeps — disproportionately affecting our Black and Indigenous neighbors — violate public health guidelines, cause irreparable harm, and make it even harder for us to provide services to the most vulnerable among us.”