Jeffrey Berger was Criminalized for Exercising His First Amendment Rights. He’s Fighting Back.

When Jeffrey marched onto I-94, he was marching for justice. Instead, he and 46 other people were criminalized for exercising their right to protest.

The Twin Cities erupted in protests following the fatal shooting of Philando Castile by Officer Jeronimo Yanez during the summer of 2016. Grieving the loss of a friend, family member, neighbor and community member—and frustrated and angry that a police officer unjustly shot and killed another person of color—an estimated 1,500 people marched onto Interstate 94 in Saint Paul.

Police arrested over a hundred people during the protest; forty-seven of them were arrested while on I-94. Jeffrey Berger was one of those people.

“People need to actively mobilize and put their bodies on the line,” Jeffrey explained. “Especially white people like myself. We live in a society that protects us in many ways. I think it’s necessary for us to step forward and take action in order to make change.”

Jeffrey was not creating a “public nuisance” that evening in July 2016. He was creating change.  And he was arrested and criminalized for it.

Nearly two years later, Jeffrey was the only one of the I-94 protesters arrested that night to face trial. He was ultimately convicted of a misdemeanor public nuisance charge and sentenced to spend 90 days in a correctional facility, which was stayed pending completion of one year of probation. He was also sentenced to pay a $300 mandatory minimum fine.

Jeffrey’s sentence was more than three times the penalty received by I-94 demonstrators who took a plea deal for the same conviction—30 days in a correctional facility (stayed pending completion of one year of probation) and a $50 fine. People like Jeffrey who choose to defend their constitutional rights in court face harsher penalties than those who take plea deals. For those who cannot afford the jail time or hefty fines, fighting for their rights is hardly an option.

The Saint Paul City Attorney’s office wants to set an example by charging Jeffrey even though he was peacefully protesting.

The ACLU of Minnesota is appealing Jeffrey’s conviction, arguing that his conviction violates his First Amendment rights and that the public nuisance statute is too vague. ACLU-MN is also arguing that there is insufficient evidence that Jeffrey did anything wrong in the first place.

“Protest is not always convenient, nor does the Constitution require it to be,” said ACLU-MN Legal Director Teresa Nelson. “The state does not have a compelling reason to criminalize all protests on public highways simply because they are on a highway.

“People engaging in a nonviolent protest shouldn’t have to fear spending up to a year in jail. And having to pay exorbitant penalties such as this can have a chilling effect on free speech and assembly. Unfortunately, that could be exactly what some government actors are hoping.”

Following the I-94 protest, Minnesota legislators introduced anti-protest bills, including one that would increase penalties for obstructing a right-of-way to a highway, airport or transit. Gov. Mark Dayton vetoed the bill last session after widespread dissent across the state.

That didn’t stop legislators from introducing the bill yet again, along with another bill that would make individuals civilly liable if they are even remotely associated with a protest or assembly in which damage or trespass to “critical infrastructure” occurs.

As Jeffrey fights his wrongful conviction, the state legislature is doubling down on its intention to chill free speech and assembly of Minnesotans. In fact, anti-protest legislation could be headed to the governor’s desk in the coming weeks.

“Local government is using the law to suppress protest and the movement for justice,” Jeffrey said. “Freedom of speech is necessary for people to organize for justice. People can be a part of change, and that involves showing up at demonstrations, signing petitions and voting. But the presence of people on the street is what stops the system from functioning. And it’s a key part of change.”

MESSAGE GOV. DAYTON AND TELL HIM TO VETO LEGISLATION THAT ERODES FREEDOM OF SPEECH ➜ 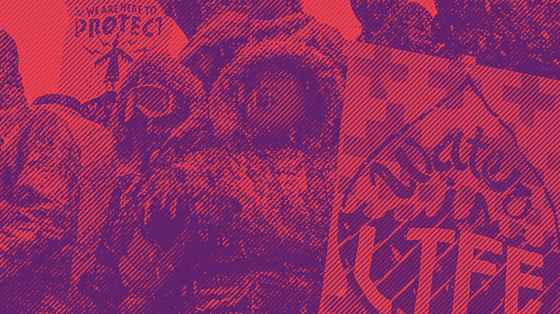