Trump's Transgender Military Ban Threatens All of Us

Trump’s tweets have an impact—and his words harm our military, our youth & our communities

Nicole Vanderheiden is a former Staff Sergeant of the U.S. Air Force and an Iraq war veteran. She is the lead organizer on transgender issues for Common Defense PAC and advocates for transgender youth and families.

Last month, Donald Trump issued three tweets signaling his intention to exclude transgender individuals from the U.S. military. His tweets prompted a lawsuit by transgender service members and the cloud of uncertainty around it still has not dissipated weeks after the declaration. Current transgender service members have told me military units and medical facilities are using Trump’s proposal inconsistently as a justification to deny records updates and transition related medical care – even after the chairman of the Joint Chiefs of Staff, General Joe Dunford, said the Pentagon will implement no changes until the White House issues a formal directive. And now, a month after he first tweeted about the military ban, Trump is reportedly preparing guidance for the Pentagon on how to turn those tweets into policy. 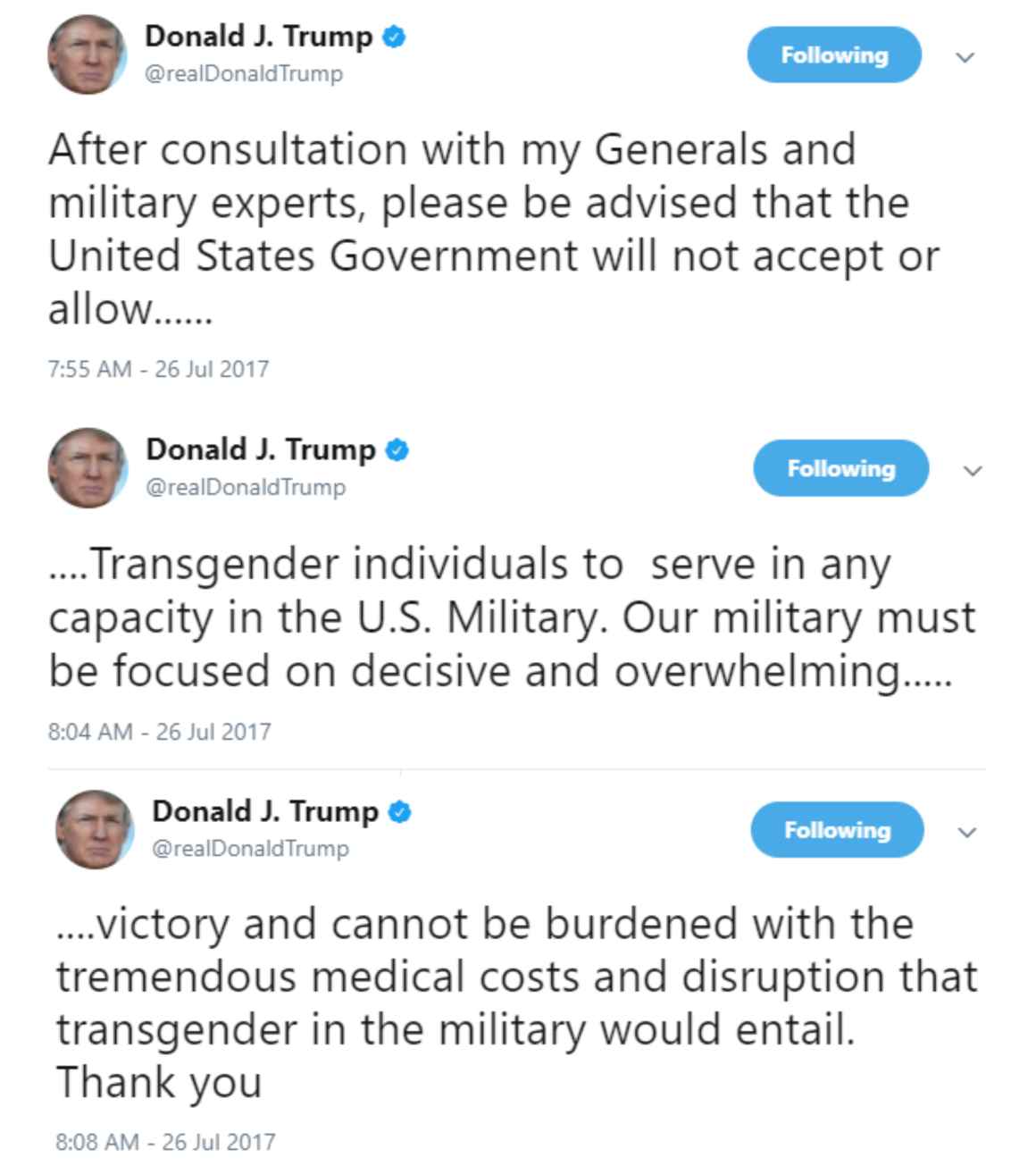 The impact of those three small tweets continues to unfold and affect the lives of thousands of Americans. When I read his tweets, my heart burned – it still does. It burns because of the uncertainty now obscuring the futures of thousands of transgender soldiers, sailors, airmen and marines currently defending our country. It burns because a man who has never served is telling transgender veterans and service members their contributions are merely a disruption. It burns because I, a transgender woman, served as a Staff Sergeant in the U.S. Air Force and was decorated for my involvement in the counterinsurgency operations taking place in Iraq 2009 – 2010 and I believe my work mattered.

Trump not only libels our honored heroes, but, just as harmful or more so, he undercuts the futures of our nation’s transgender youth. He is telling our youth they are incapable of being productive team members because their existence is a burden and a disruption. He is reinforcing the message being hammered into their minds day in and day out: You are less than. You are in the way. You are a liability. You are not welcome here. All of our youth, cisgender and transgender alike, need to hear they are capable of great things and they can be part of something bigger than themselves.

As part of my role on the board of directors of Transforming Families MN, I have the honor of interacting with transgender youth and their families and let me tell you, they have more grit and determination in their little fingers than many of the men and women I served with. They fight for every square inch they stand on and they do not back down from bullies, school administrators, or an entire society hostile to them. By denying our strong and courageous transgender youth the opportunity to serve their nation, Trump is denying them full participation in American life.

It does not just harm them – the rest of us are harmed by the loss of their contributions. And Trump’s rationale? First, he cited “tremendous medical costs.” The ridiculousness of this assertion is clear when you learn the military already spends ten times more money on Viagra and other erectile dysfunction drugs than the high-end estimates of transition related medical costs, as reported by a number of outlets from Think Progress to the Washington Post.

His second argument is even weaker. He insists the very act of integrating transgender service members into the military would be a disruption. This tired line has been used frequently over the past several decades and has proved to be unfounded every time. Opponents cried “DISRUPTION!” during racial integration of our military in the 1940s and ‘50s. They cried “DISRUPTION!” as women became more integrated from the nurses of World War I and II, to the first women admitted to the service academies in 1976, to being fully integrated into combat roles in 2015.  They cried “DISRUPTION!” when gay men and women were admitted into the military in 1993 and when they claimed the right to serve openly in 2010. But disruption never came.

The fact is nothing can be more disruptive than this chaotic move. The pentagon took painstakingly slow and deliberate steps toward integrating transgender individuals into our military forces and then, once the implementation had begun and transgender service members had already come out under a promise of protection and fair treatment, the rug was pulled out from under them with three seemingly impromptu tweets. Nothing could undermine unit cohesion more than telling thousands of currently serving troops they do not belong in their military.

For the sake of our youth, for the sake of our military members and veterans, and for the sake of the security of our nation, this ban needs to be thrown into the trash heap of history beside nearly all of Trump's other attempts at policymaking. And we need to keep resisting until it is laid to rest once and for all.

HHS wants to roll back rights for transgender patients across the...

What Pride Means To Me