Before N.H. started his freshman year at Coon Rapids High School, his mother talked with the principal to make sure that her son would be safe.
The smart and witty teen had known since he was 3 that he was a boy, and had recently decided to come out as transgender. The principal and other staff reassured his mother about his safety.
The teen joined the boys’ swim team and used the boys’ locker room with his fellow students for months, without any complaints or problems.
“His diving skills were improving, he was being treated fairly and felt like he belonged,” said his mother, J.H.
But then the school board got involved. They prohibited him from using the same boys’ locker room that he had used for months. And suddenly the teen boy’s happy high school days were over.
“The board singled the teen boy out,” said ACLU-MN staff attorney David McKinney. “They segregated him from his classmates and forced him to use a changing facility that no other student had to use. This degrading treatment made him feel unwelcome and alone.” 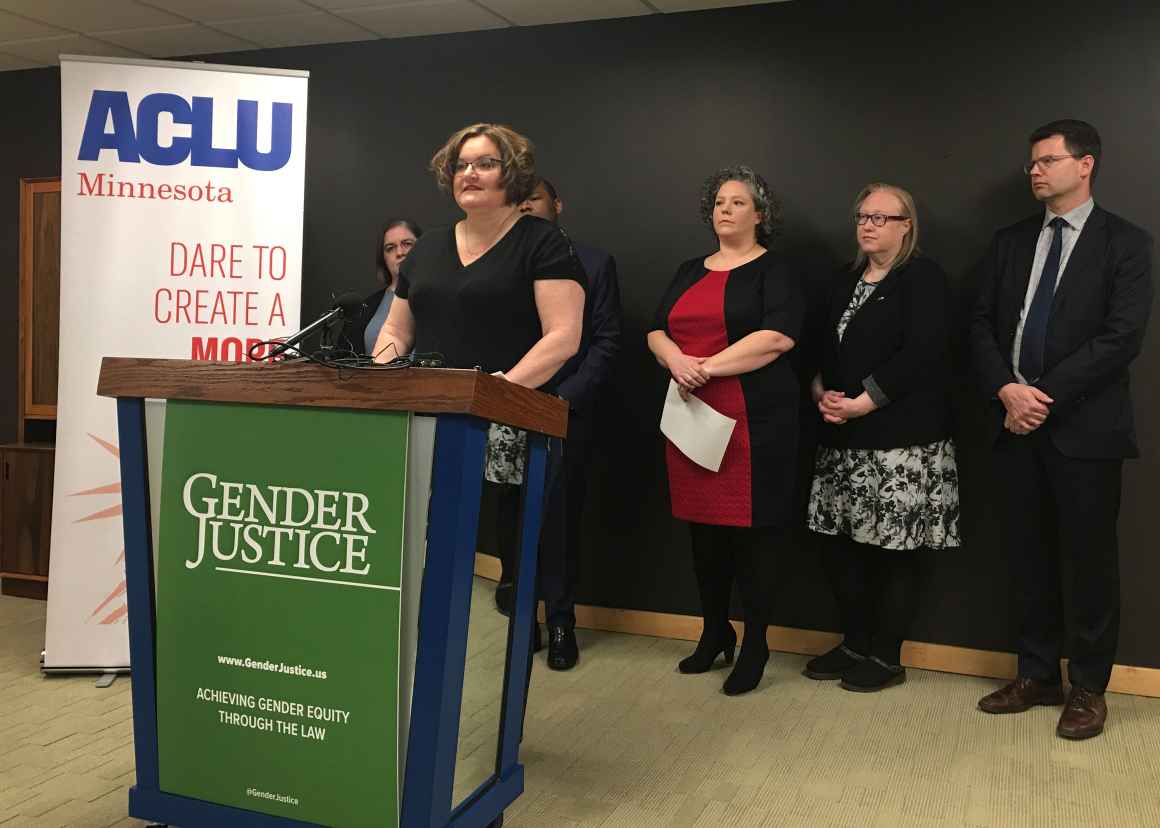 J.H. stood up for her son’s rights. She asked the school board repeatedly to follow gender-inclusion policies like those of the Minneapolis and Saint Paul Public Schools.
But Anoka-Hennepin refused, insisting that N.H. must not use the boys’ locker room and that he would be disciplined if he did. Instead, they sent him to a separate changing area, away from his friends, all by himself.
The teen boy – who had been doing well academically and socially until the district intervened – started getting bullied and threatened. His mom still gets threats.
That’s why the ACLU of Minnesota and Gender Justice filed suit in Minnesota state court against the Anoka-Hennepin School District and School Board. We are suing them for discriminating against N.H. because he is transgender. That violates the Minnesota Human Rights Act and the rights to equal protection and due process under the Minnesota Constitution.
“I didn’t choose this battle,” his mom said. “The school board chose us. They used their power and went out of their way to create a problem where there wasn’t a problem to begin with. They conspired to isolate my son and ultimately their actions altered the course of his life – and our family’s life. Through all of this, they robbed him of a normal high school experience.”
N.H. ended up in the hospital out of concern for his mental health, an all too common occurrence for transgender youth. Transgender students are two to three times more likely to experience daily verbal and physical harassment. More than half attempt suicide. Eventually, N.H. had to switch schools.
“Every child should have the opportunity to get a good education, to be an athlete and participate in extracurricular activities,” his mom said. “They should never have to question their safety because of their identity.”
What makes this case even more shocking is that the Anoka-Hennepin district already had been sued for discriminating against LGBTQ students, showing a pattern of targeting these kids. That lawsuit, which followed nine student suicides in two years, alleged that the district allowed uncontrolled bullying and created unequal access to education.
The district entered into a five-year consent decree with the Justice Department to deal with and document student harassment. The district was still being monitored when it discriminated against N.H.
Like everyone, transgender students want and deserve acceptance. Allowing them to live as their true selves lowers their risk of depression and anxiety.
“I think we can all agree that it’s hard enough being a teenager without the school board stepping in to turn your very existence into the subject of school board debate,” said Gender Justice Executive Director Megan Peterson.
Editor’s note: We are using initials to protect the family’s identity.
Related Issues

HHS wants to roll back rights for transgender patients across the...

A Letter to Superintendents: Support Students Who Walkout